In the light emission phenomenon known as electroluminiscence,energy is released in the form of photons (light energy) when electrons combine with electron holes within the device.This was discovered by H.J.Round way back in 1907.It took almost 55 years before the first visible red LED was developed by Nick Holonyak Jr. while working in General Electric USA. He is also known as 'father of light emitting diode'.But for almost 40 years LED had very limited application as a light source due to its emission mainly in infrared and longer wavelength spectrum.The application of red LED was restricted to indicator light . It was Shuji Nakamura of Nichia Corporation who brought in the first high brightness blue LED. Since the beginning of this millennium LED as a light source for illumination has grown in rapid strides due to developments in material science, chip fabrication process, development of high power LED package.
The principles of light emitting diodes  are shown pictorially. However the applications of LEDs in lighting were confined to aviation lights and traffic signal lights till the evolution of white LEDs. This followed only after Nakamura's discovery of blue LED, and was achieved by mixing blue with yellow light which made the mixture appear white to the human eye.White LED composed of a single semiconductor chip was invented by Prof Jurgen Schneider of Fraunhofer Institute of Applied Solid State Physics in 1995.  Gradually energy efficient home lighting, street lighting and even floodlighting with LED started becoming a reality. Growth in this sector of green light is rapid. With developments in chip production technology ,organic LEDs (OLEDs) were also introduced in addition to the conventional  LEDs.Organic LEDs are carbon based films sandwiched between two charged electrodes ie. a metallic cathode and a transparent anode ( usually a thin film of metal evaporated on a glass substrate ).Made from flexible polymer these transparent sheets emit bright light when biased and are being used as screens in cell phones,MP3 players, cameras etc.A lot of research is underway to make OLED a practical source in lighting. Quest for a greener energy has provided impetus to scientists and technocrats all over the world to make LEDs more and more energy efficient. Highest lumen/watt of 160 lumen/W, which till date was boasted by low pressure sodium vapor lamp, has already been achieved by Bridgelux for gallium nitride on silicon ( GaN-on-Si ) - by inducing growth of crack free GaN layers on 8inch  silicon wafers. Recently researchers at Harvard School of Engineering & Applied Sciences have demonstrated a robust new architecture for quantum - dot LEDs ( QLEDs ). QLEDs have been found to produce better color reproduction, energy efficiency and cost effectiveness due to lower manufacturing costs.

The physics of light emitting diode explains how the wavelength or colour of the radiation is dependent on the energy of band gap energy of the materials forming the p-n junction.That is why materials used for LED have direct band gaps , and since LEDs were made of gallium - arsenide in the beginning color of light was restricted to near infra red and red.Advances in material science provided a lot of scope to LED researchers to develop LEDs emitting light in shorter wavelengths.Most materials used for LED have very high refractive index.For eg. refractive index of bare uncoated silicon is 4.24 relative to air which is 1. As a result much of the light gets reflected back inside at the air /material surface interface, affecting the light emission efficiency of the LED.Increasing the light efficiency has been a challenging task since.Many different optical shapes for chip surfaces have been developed. A convoluted chip surface with angled facets similar to Fresnel lens was one such development.

As mentioned earlier in this article, it is only after Prof. Schneider's invention of white light LED chip in the mid nineties that LED found its place as a light source in general lighting applications. The white LED with efficiency from 85 - 125 lm/W already outperformed tungsten halogen products.The operating principle consists of an LED-chip whose blue radiation excites yellow fluorescent particles mixed with the resin. The emission of blue and yellow light finally results in white light.A comparative illustration of light sources which evolved over the centuries for general lighting applications is shown below in the figure captioned 'LED for General Lighting'.Due to its inherent advantage of long life and being termed 'Green Light', researchers all over the world are focusing on development of more efficient optical system, thermal management for enhancing reliability and standard light engines like those in conventional technologies such as fluorescent and HID. Though currently there is no standard for the interface between the LED engine and the fixture various types of LED Modules have come in the market catering to luminaires for different application areas.However the most promising ones are modules comprising light source,driver electronics,optics and thermal management in a single unit.

Electric potential energy is converted into electromagnetic energy whenever electron recombines with positive charge. This quantum of electromagnetic energy emitted as light is known as photon. The frequency characteristic of this emission is dependent on the semiconductor material used because band gap energy varies with semiconductor. As illustrated light is emitted perpendicular to the semiconductor surface from all the four sides. In order to direct the light toward the desired exit direction, the chip is placed in a tiny reflective cup.
........   (  to be continued.... 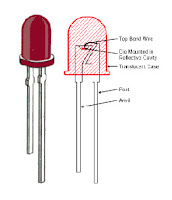 Linear relation between forward current and light output from LED. 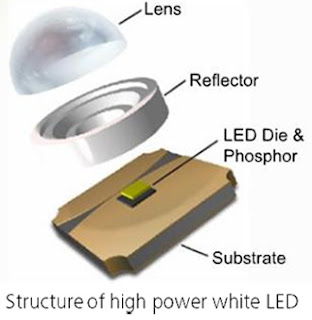 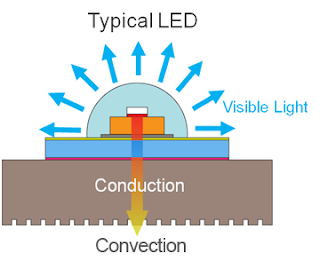 -From Gas lights to LED lights-
Champs de Elysees Paris dresses up with LED lights for Christmas of 2011
Champs de Elysees, the most attractive avenue I have ever seen, is also known as 'La plus belle avenue de monde' i.e. 'the most beautiful avenue of the world'. It ends at the Arc de Triumphe built by Napoleon Bonaparte to honor his victories.

vinish said…
This was really beautiful. You are so professional. Sign Boards Chennai